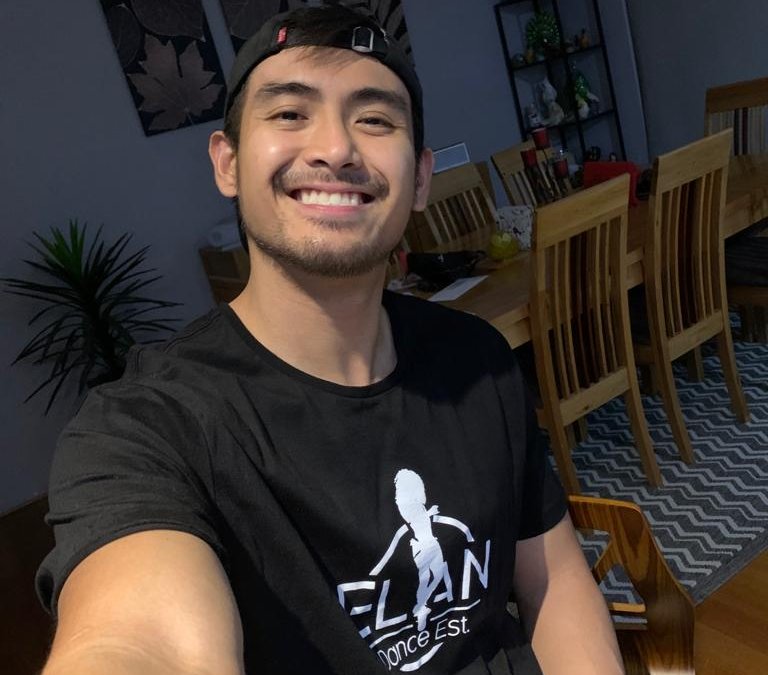 “By the end of my first class I was in love with Élan, I knew right then and there that Élan is the place/community.”

It may have been a strange month with the virus that shall not be named keeping us inside for part of it, but that won’t stop us from celebrating this month’s DANCER OF THE MONTH. Hip Hoppin’ Hair Dresser Extraordinaire Aaron Rojas! We sat down with Aaron to chat about his dance journey and how he found his place at Elan.

Tell us about how you got into dancing.
“I started dancing, right around in my primary/kindergarten years, it was for a school parade for our phys. Ed class and I remember doing a number for either Westlife or S Club 7 (😂). Then throughout the years, I did some Filipino folk dancing in my elementary years. In high school I did some cheerleading and then I stopped, it was only until now in my late 20s that I’ve just really given my dancer persona so much attention.”

What made you decide on Élan?
“Before I found Élan in August, it was at a point when I’ve accomplished things that I wanted to accomplish, and then I realize I’ve always wanted to dance and I knew I had good rhythm, I knew it was something innate for me, and when I was looking for a really good Dance studio I found Élan, only went for a pass as a trial, but by the end of my first class I was in love with Élan, I knew right then and there that Élan is the place/community.”

What was your first experience like at the studio?
“My first experience with Élan, wast at first nerve racking, because it was afrojam. I’ve always wanted to dance in the same styles as afrojam, and I was so happy as to how Jonathan taught the class. He made me feel included and I remembered when he first showed us the choreo of the night, I was just in awe on how this man can move and I can just watch him all day but then I knew he’ll be a great inspiration to show me that as a man, you too can dance your butt off and I was glad that I was actually able to keep up with Jonathan.

What were you hoping to get out of the experience?
“One of the things that I wanted to get out of my experience is, validation and proof, not from anyone but me, like I said previously, since I was a kid I knew I had rhythm and after that first class, I had proven myself that I can actually dance and it’s self acknowledging and self-validating for me.”

What Made you stick it with it?
“So after the first experience, and after realizing that I can dance, I knew it’s not gonna stop there. I knew that once I made the first step, there will be so much growth for me to mature into as a novice dancer. Élan became that safe space for me to become better week by week and at that point, Élan had been fuelling my passion to dance and I also realised that Élan is probably the most diverse establishment that I’ve come across. I love that about Élan.”

What would you say to people who are scared to give it a go?
“To the people who are about to start out doing any of our classes, my advice (and I’ve used this as well on me) is that in order for you to give it a go, you have to let go of control. The control of fear and doubt and to not over think the choreo or a movement, we’re all capable of learning how to dance, but the key to dance is to let go of anything that’s holding you back, because the second you let go of control, that’s where the beats of choreography and movement will take you. To a place where you’re supposed to be and that is DANCE a realm of Physical Freedom of Expression.”

What would you say is your biggest highlight since joining Élan?
“My biggest highlight since joining Élan was when I had the opportunity to perform in our Dance Showcase and the purest highlight was when choreographers Dayna and Amber told me that I have a solo part in their collab piece. That’s when I knew that my mentors/choreographers saw something that I personally have not yet seen in myself at that time and despite that, I knew I can’t fail them. I knew I’m going to need to light up that stage the second that spotlight hits me. During that performance, while I was performing with my Élan family, I was purely at peace. I wasn’t holding back, neither things were holding me back, I was in that realm of pure Physical Freedom of Expression, I was dancing, I was living, I was on fire.”

Congratulations Aaron! Thank you for bringing joy and passion to our community. We can’t wait to dance with you again.

There you have it Perth!? If you resonate with Sam’s story give us a call so we can get you started on the journey of your best life.

Yes, we offer Australia’s most inclusive and grooviest hip hop dance class for adults, teens, tweens and toddlers but above all, we make your mental and physical well being our number one business.